Here’s my first swatch post of 2013, and it will be short and sweet! This is Different Dimension Emily, inspired by the TV show “Pretty Little Liars,” which was on my wish list for awhile. I finally nabbed it during a Black Friday sale.

Different Dimension Emily has blue, white and light green glitter in a light blue sheer base. I’ve seen other bloggers say they used it on it’s own without undies and built it up, but I actually used something underneath. 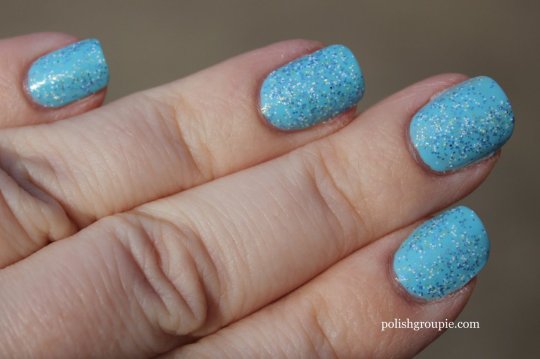 My disclaimer on this is that the application was actually done at a nail salon. It’s one coat of Different Dimension Emily over one coat of … something. The bottle was China Glaze but the name was mislabeled. If I had to guess, I’d say it’s Bahamian Escape, but really that’s just off of swatches online. I don’t own it. If anyone recognizes it, please let me know!

I love Different Dimension Emily. I think this combo looks perfect for winter, almost like a snowstorm. I think it would look great over a dark blue too, or maybe over silver.

Different Dimension polish is available on Etsy. As of this posting, Emily is in stock.